SDL supports modal menus. The user can respond to the list of menu options via touch, voice (if voice recognition is supported by the head unit), or by keyboard input to search or filter the menu.

There are several UX considerations to take into account when designing your menus. The main menu should not be updated often and should act as navigation for your app. Popup menus should be used to present a selection of options to your user.

Presenting a popup menu is similar to presenting a modal view to request input from your user. It is possible to chain together menus to drill down, however, it is recommended to do so judiciously. Requesting too much input from a driver while they are driving is distracting and may result in your app being rejected by OEMs.

An SDLChoiceCell is similar to a UITableViewCell without the ability to configure your own UI. We provide several properties on the SDLChoiceCell to set your data, but the layout itself is determined by the manufacturer of the head unit.

On many systems, including VR commands will be exponentially slower than not including them. However, including them is necessary for a user to be able to respond to your prompt with their voice.

If you know the content you will show in the popup menu long before the menu is shown to the user, you can "preload" those cells in order to speed up the popup menu presentation at a later time. Once you preload a cell, you can reuse it in multiple popup menus without having to send the cell content to Core again.

To show a popup menu to the user, you must present the menu. If some or all of the cells in the menu have not yet been preloaded, calling the present API will preload the cells and then present the menu once all the cells have been uploaded. Calling present without preloading the cells can take longer than if the cells were preloaded earlier in the app's lifecycle especially if your cell has voice commands. Subsequent menu presentations using the same cells will be faster because the library will reuse those cells (unless you have deleted them). When you preload a cell, you do not need to maintain a reference to it. If you reuse a cell with the same properties that has already been preloaded (or previously presented), the cell will automatically be reused.

In order to present a menu, you must bundle together a bunch of SDLChoiceCells into an SDLChoiceSet.

If the SDLChoiceSet contains an invalid set of SDLChoiceCells, the initializer will return nil. This can happen, for example, if you have duplicate title text or if some, but not all choices have voice commands.

Presenting the Menu with a Mode

Finally, you will present the menu. When you do so, you must choose a mode to present it in. If you have no vrCommands on the choice cell you should choose manualOnly. If vrCommands are available, you may choose voiceRecognitionOnly or both.

It may seem that the answer is to always use both. However, remember that you must provide vrCommands on all cells to use both, which is exponentially slower than not providing vrCommands (this is especially relevant for large menus, but less important for smaller ones). Also, some head units may not provide a good user experience for both. In addition to presenting a standard menu, you can also present a "searchable" menu, that is, a menu with a keyboard input box at the top. For more information on implementing the keyboard callbacks, see the Popup Keyboards guide. You can discover cells that have been preloaded on screenManager.preloadedCells. You may then pass an array of cells to delete from the remote system. Many times this is not necessary, but if you have deleted artwork used by cells, for example, you should delete the cells as well.

If connected to older head units that do not support this feature, the cancel request will be ignored, and the choice set will persist on the screen until the timeout has elapsed or the user dismisses it by making a selection.

Starting with SDL v7.1+ choice cells no longer require unique titles in order to be presented. For example, if you are trying to display points of interest as a list you can now have multiple locations with the same name but are not the same location. You cannot present multiple cells that are exactly the same. They must have some property that makes them different, such as secondaryText or an artwork.

The titles on the choice set will be displayed as provided even if there are duplicate titles. 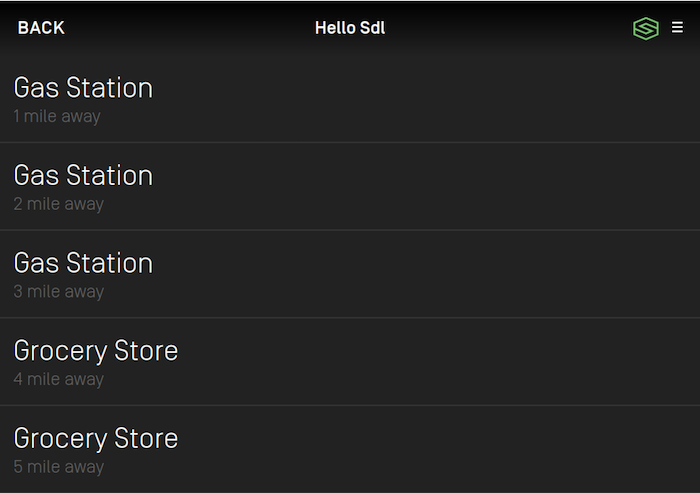 RPC v7.0 And Below Connections

The titles on the choice set will have a number appended to them when there are duplicate titles. 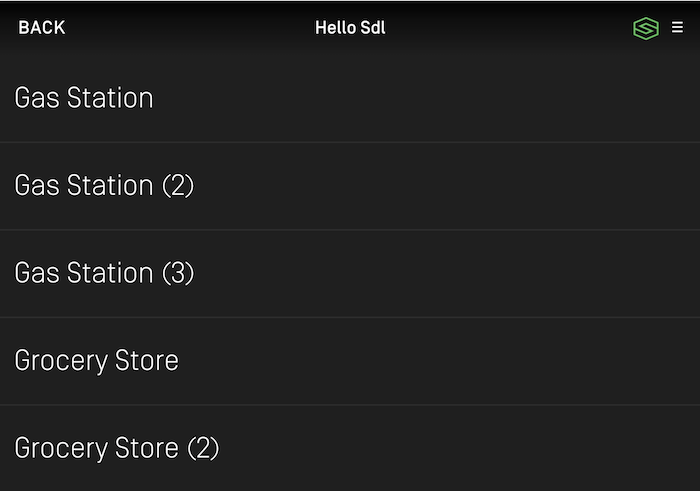 Note that if you do manually create a PerformInteraction and want to set a cancel id, the SDLScreenManager takes cancel ids 0 - 10000. Any cancel id you set must be outside of that range.