When creating a music app for SDL the app should include as much of the native apps functionality as possible. If your app requires a user name and password to be used then the user should be informed for this instead of the user just being unable to access the apps functionality. Please refer to the Displaying Information section.

Your Music app should contain such basic functionality as Play, Pause, and Resume. You can use build in controls for these features by calling the subscribeButton RPC. This will allow you to not only create buttons on the infotainment system but also be informed when the user presses hard buttons, which might be placed on the steering wheel. It is important to also add voice control capabilities for these functions. To add a voice command use the addCommand RPC but omit the menuParams argument. This will create a voice command without creating an item in the menu.

Your app should display things like song name, artist name, and optionally the album name. It is encouraged to use the following layout of information on the screen:

It is encouraged to show static images of the album art, however moving or interactive images are not allowed neither is the display of lyrics.

Below is an example of the Livio Music Player home screen using the MainFields and displaying a graphic. 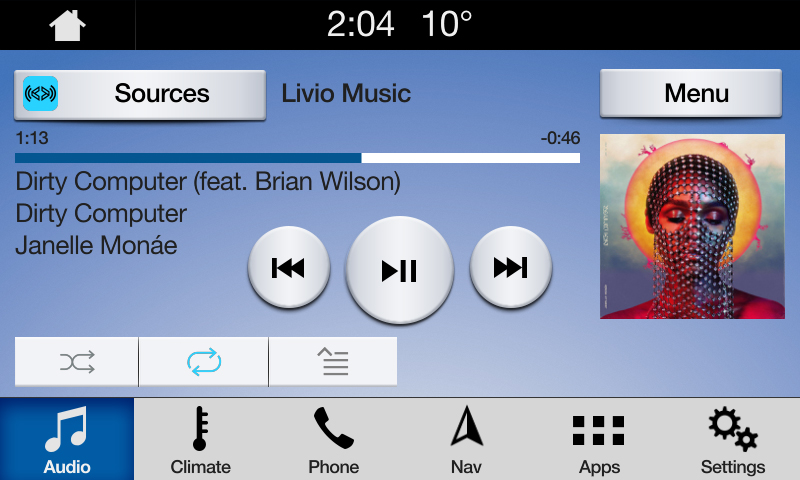 If your app features different stations or streams you should consider allowing the user to save these stations to preset buttons. To receive notifications about preset button presses please use the subscribeButton RPC with the respective presets as arguments. On some SDL implementations you will be able to change the text on a preset button. To change this text use the customPresets array in the show RPC.

When you receive the NOT_AUDIBLE state you should pause the audio and resume when you receive AUDIBLE. The pausing and resuming should be independent on the current HMILevel state.