Capturing in-car audio allows developers to interact with users by requesting raw audio data provided to them from the car's microphones. In order to gather the raw audio from the vehicle, you must leverage the PerformAudioPassThru RPC.

SDL does not support automatic speech cancellation detection, so if this feature is desired, it is up to the developer to implement. The user may press an "OK" or "Cancel" button, the dialog may timeout, or you may close the dialog with EndAudioPassThru.

SDL does not support an open microphone. However, SDL is working on wake-word support in the future. You may implement a voice command and start an audio pass thru session when that voice command occurs.

Getting the Supported Capabilities

You must use a sampling rate, bit rate, and audio type supported by the module. Once you have successfully connected to the module, you can access these properties on the sdlManager.getSystemCapabilityManager instance.

The module may return one or multiple supported audio pass thru capabilities. Each capability will have the following properties: 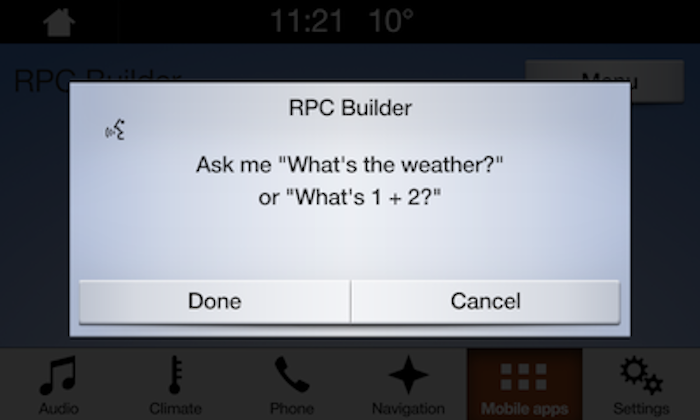 SDL provides audio data as fast as it can gather it and sends it to the developer in chunks. In order to retrieve this audio data, the developer must observe the OnAudioPassThru notification.

This audio data is only the current chunk of audio data, so the app is in charge of saving previously retrieved audio data.

The format of audio data is described as follows:

PerformAudioPassThru is a request that works in a different way than other RPCs. For most RPCs, a request is followed by an immediate response, with whether that RPC was successful or not. This RPC, however, will only send out the response when the audio pass thru has ended.

To process the response received from an ended audio capture, make sure that you are listening to the PerformAudioPassThru response. If the response has a successful result, all of the audio data for the audio pass thru has been received and is ready for processing.